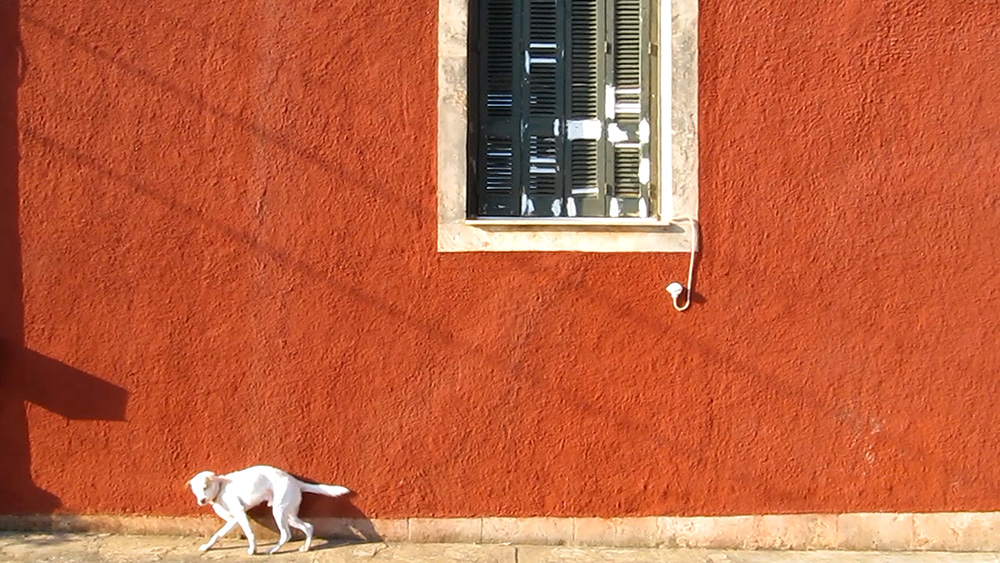 When working with the historical remnants of daily routine, there is a great temptation to overemphasize their curiosity value. In Deutsch’s case, comical sequences and unintentional peculiarities can be found, however they are not used against their original authors. In the compilation film Adria, where travelogues made by tourists in the 1950s and 1960s serve as archeological finds, there is no apparent scorn of the species of tourist that „cultural critical“ intellectuals have been joking about for decades. The filmmakers’ pleasure in finally being able to travel to the sea is always tangible.
It is these images created by pioneers that Deutsch is carefully sorting. By assembling comparable standard sequences from private films (e.g., frontal or side-window scenes shot from a moving vehicle, the play of waves, or the view of the coast), he makes it clear how much of our daily media consumption is based on a standard repertoire of „subconsciously acquired“ images and points of views. By using them as teaching material for a school of seeing, Gustav Deutsch reminds us that they indicate a collective cultural achievement on account of their normality and calculability.
(Wolfgang Kos)

In 1993, Deutsch directs an essay film in Vienna and Figuig with Moroccan Mostafa Tabbou, entitled Eyewitnesses in foreign countries. It consists of exactly 60 shots lasting three seconds each – albeit appearing in blocks of ten to twenty images per motif and thus organized into scenes lasting 30 to 60 seconds which lend the film a much calmer quality than one might expect under the technical circumstances. Two filmmakers gaze on foreign territoriy: one is a European in Africa, the other an African in Europe. Each directs exactly 300 shots, additionally providing the film with symmetry in its overall structure. The African part directed by Deutsch inversely mirrors the Viennese part realized by Tabbou: heat versus cold, light versus darkness, professional versus amateur filmmaker. Deutsch and Tabbou only seem akin in terms of the distance they keep to the world they are shooting: One can only view the foreign from afar. (Stefan Grissemann)

Spontaneous, unplanned, not staged recordings, mostly in foreign countries.
Paying increased attention on the ordinary.
Applying the ingenuity of the researcher on the ordinary.

All have in common:
One single take
No editing
No postproduction
Original sound

Recurring themes turned up, that can be compared with the subjects of the pioneers of cinematography, as well as with the practice of amateur filmmakers and film amateurs from the mid 20th century.

panorama
Scanning the foreign surroundings, in 360 degree pans, from the left to the right, like through the periscope of a submarine
Nothing and nobody can stop the movement.
Positioning.
Me, at the heart of the surrounding world.

mini drama
Staged reality by director “chance”.
Entrance and exit of the protagonists like on demand: Action! Cut!
Actors and supporting actors.
The event defines beginning and end.

observation
A random section of the course of events.
Passive observer.
The end is given by the predetermined recording time.

bird watch, dog watch
The camera as a chronophotographic shotgun.
Wildlife watching through the eyes of a researcher or hunter.

Two married couples on a journey from Vienna to the North Cape and back. On Saturday, 29th of June they cross the polar circle and stop by the sign which says "Arctic Circle".....